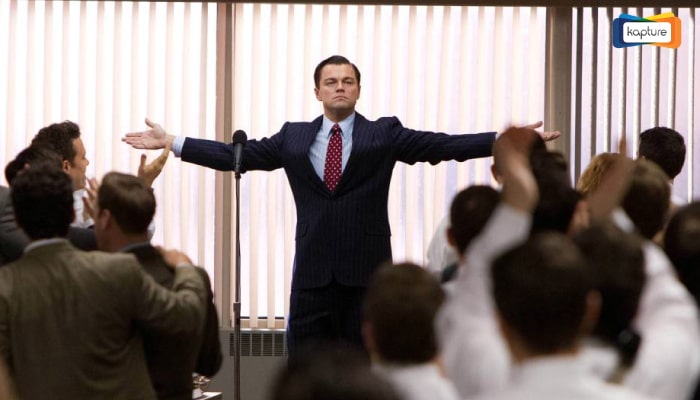 Making a sales call often comes with several challenges like; should I introduce myself and then greet the client? Am I boring the client? I won’t be able to do it, let’s just hang up. All of us, every day, try to figure out a better way to approach a client. In order to do that, we have to keep ourselves motivated. But there are times when you are doing your best on a sales call but the client ends up the call saying, “We’ll let you know”.

On these days we look up to the sales gods and internally question our existence……but like every story there always is an upside to a terrible week. Movies on the other hand let us join the hero in his journey towards greatness, we see him try and then fall down and try again.

To keep you motivated – we’ve compiled a list of the top 10 sales movies that will help motivate you to pick up the phone and dial for dollars.

After a lot of persuasion the brothers agree and the film then charts Ray Crocs journey into expanding the McDonalds business. But he ends up encountering financial difficulties even after he signs a contract with the brothers and his eventual move to take over the McDonalds name in the movie’s finale helps him achieve the riches he truly seeks out.

Bud Fox played by Charlie Sheen, is a junior stockbroker who teams up with Wall Street mogul Gordon Gecko played my Michael Douglas to use dubious insider trading techniques to cash out big in the stock market. The film follows Bud Fox as he continues to secure insider information for Gordon Gecko but ultimately ends up attracting the attention of the Securities and Exchange Commission.

Three industrial lubricant salesman set out to close their biggest client yet by checking into the same hotel as their sales target – in an attempt to seek an appointment to pitch him their product.

Larry Mann played by Kevin Spacey and Phil Cooper played by Danny Devito – two experienced marketing professionals expect to close this appointment by the end of the target’s stay at the hotel. They are accompanied by a rookie salesman who – through a series of accidents – ends up being the one who connects with their intended target at the end of the movie.

Tommy Callahan played by Chris Farley – must overcome his social anxiety and Hyperactivity to save his recently deceased father’s auto plant by hitting the road to sell 500000 units of a brake pad they just made. The films shows us that when all else fails it’s okay to be down – but what will take you to your destination is a never-give-up attitude.

Four unsuccessful real estate salesman are now in danger of losing their jobs when a new sale head played by Alec Baldwin announces that the top two sales man will be allowed access to Alec Baldwin’s collection of better leads and the rest will fired immediately.

Jerry Maguire is an inspiration packed movie about a sleazy sports representative develops a conscience and feels the company that he works for should focus on lesser clients with better service. This great epiphany ends up getting him fired which then encourages him to start his own sports representation agency.

The film follows Tom Cruise as he hustles to satisfy the needs of his only client Rod Tidwelll played by Cuba Gooding Jr. – eventually succeeding to make ends meet at the end of the movie and giving us one of the most used phrases “Show me the money”.

The movie revolves around Mark Zuckerberg and his initial stages of developing Facebook. Jessie Eisenberg a.k.a. Mark turns a brain wave for a photo sharing website into a full blown social media platform that powers the eyes of millions of users every day.

The film cuts back and forth between Mark being sued for ‘allegedly’ stealing the idea of Facebook from Winklewoos twins and his best friend. The films cuts between the lawsuit and moments from Mark’s past where we see how the idea began to germinate into the giant it is today.

Leonardo Dicaprio won the hearts of all with his magnificent performance and I personally think he deserved an Oscar for that.
The movie is an autobiographical account of entrepreneur and sales trainer Jordan Belfort who arrives at Wall Street as a money hungry youth but then turned his dream of big moolah into reality when he started selling pink sheet or penny stocks to the everyday joe and started making a fortune off his commissions.

Steve Jobs was a genius that foresaw trends even before they came to exist. As an adopted child – his need to creatively manifest his dreams turned into the religion that Apple has become. The movie is based on his official autobiographical account written by Walter Isaacson.

The best skill that one can acquire is the ability to effectively sell his ideas and with Apple’s products having cult launches each year – it’s safe to say that Steve Jobs is one of the greatest people to learn from.

Chris Gardner played by Will Smith invests his life saving into purchasing a bunch of bone density scanners that he believes are more effective than X-RAY machines.

The movie is about his struggle with poverty, homelessness, hunger, and a son to take care of. The real life Father Son duo portrayed theD characters so well that you can feel their burning desire to lead a better life.

Brilliant plots make a great impact on our minds and movies like these motivate us to do something extra, out-of-the-box and achieve something greater than usual. These movies also tells us a few better ways to approach your client with a fresh perspective.

Let me know which movie was the synonym of motivation and inspiration for you.