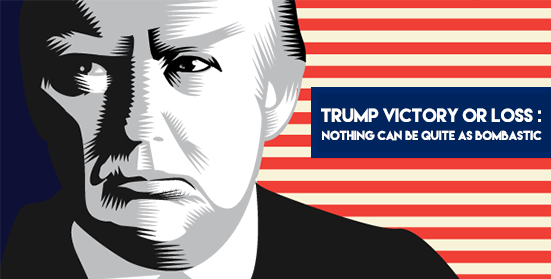 Will Donald Trump Need a Customer service Suite after elections?

We have to begin with an obligatory confession. We are a totally illegal alien, completely foreign to the US political scenario.

Really, we have no business writing this article, but here we are because it’s fun to hold the opposite end of the stick. Yes, it is fun to poke at someone where we know they don’t have a comeback. So we dare.

Let’s consider the most vociferous party in this entire melee – Donald Trump.

Initially adored for his outsider outlook, the mouth organ called Trump is now waning and dissipating. The allegations and desperate tweets are just adding gasoline to the fire.

Even the staunchest supporters are now failing to find a reason for their choice. It’s like finding out that the beloved peter pan is a Fifty year old who sells pot in school backyard.

As November is almost upon us, this article is all about the election outcome and what happens after the election.

In this article, we will ask few important questions. 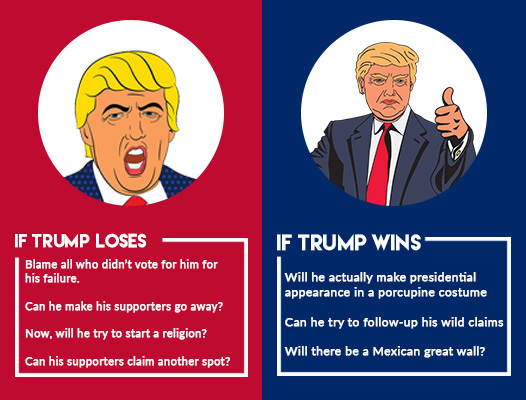 1. If Donald Trump Loses the election

If Trump loses, it will be a classic case of customer oversell-and-under-delivery – at-least for Trump supporters. In this case, there is a real chance that the supporters may get agitated and demand an explanation from Trump for losing the election.

According to Trump University manual, if the customer says that he has been oversold on a promise, you should simply retort with the quote “Trump is the best.”

According to the Documentation, if a customer persists with his complaint, you should follow up with the following statement.

“Eggs are meant to be broken or otherwise they would go rotten”. You are supposed to repeat this until the complaining person gets confused and leaves.

But Trump’s panels of experts consider this to be a hard to sell idea on mass scale. In this situation, there have been recommendations to set-up massive voters consolation units to console the supporters hit by the truth.

In this situation, we recommend that Trump uses some kind of customer service suit to manage this customer outrage.

2. If Donald Trump Wins the Election

Let’s say that you are going to face an extreme case of ‘Bradley effect’, where the Hilary supporters overwhelmingly turn on their heels and vote for Trump.

Now, this leads to a list of very important ‘what-if’ questions.

What can Trump do to keep his supporters as entertained as they are at this moment? Rather than stolid boring talk by national leaders, would we start seeing a whirlpool of threats in every International Conference? And can we finally witness a presidential appearance in a porcupine costume?

As these may all raise citizen anxiety and emergency calls, the experts have calculated that white house help line may choke in a scenario that will be 300 percent above capacity.

By November 9, we will know whether trump-ism wins or vacates the spot. Then the question ‘what next for Trump?’ becomes all the more important.

As the Trump-o-mania comes to a closure, Trump may want to be prepared to take care of the repercussions.