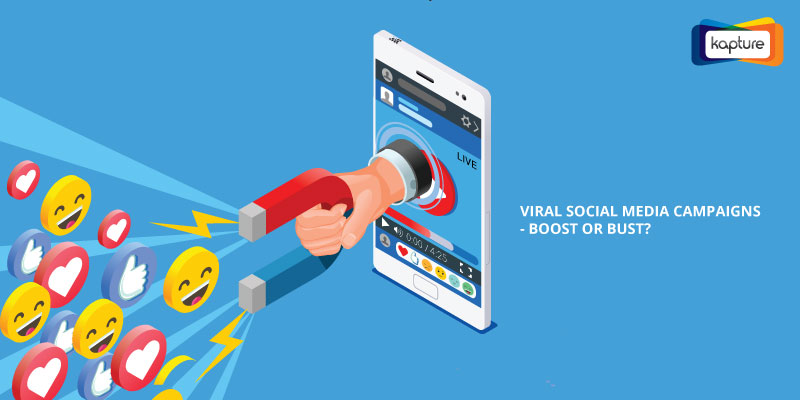 What does it mean to ‘go viral’ on the internet? Well, in simple terms, it’s when any content rapidly gains traction within a short period of time, with social media users circulating this content to their followers who in turn share it with theirs, and so on. When done right, viral advertising can put your brand in the spotlight, giving you the desired kind of publicity to boost your reputation with the general crowd.

Does it, however, always work? Read on to find out whether viral marketing is a boost or a bust.

Let’s be honest, viral marketing does not always come free of cost. Although it is not possible to force a content to go viral, it is certainly possible to boost popularity through effective marketing tactics. Brands pay huge sums to influencers and marketers in order to increase customer traffic and generate a wider audience for their content. Is it truly viral if the content is being enhanced through endorsements?

Viral marketing is without guarantee, since it is impossible to forecast with conviction whether an advertising campaign will go viral. Sometimes ad campaigns go viral as a result of just dumb luck. For instance, Yakult experienced a huge increase in recent sales due only to the references of a “Korean yoghurt” in the movie ‘To All the Boys I’ve Ever Loved’. Who could’ve predicted that! One cannot force a campaign to become viral content and so, in most cases, your viral campaign may not be met with the expected amount of enthusiasm.

During 2017, Pepsi launched a campaign which showed Kendall Jenner pacifying Black Lives Matter protesters and policemen by opening a can of Pepsi. The campaign elicited an adverse reaction from the public who accused the brand of trivializing the movement. It is possible for campaigns to go viral – for all the wrong reasons!

Advertising campaigns generally require good timing. Viral content requires an even better timing. You could launch an elaborately planned viral campaign on social media, but have it amount to nothing only because the trend had already passed, or the general mood of your audience was unwelcoming.

Forgotten as quickly as it went viral

No content remains viral forever. In fact, in this fast-paced digital age, most items are front-page news one day and forgotten the very next. All it takes is for the next viral sensation to knock you off the viral success wave you’re riding and who can foresee how long that would last?

The ambiguous measure of success

Now, how does one even begin to measure the success of a viral campaign? Would you say a campaign has “Gone Viral” at one million views, or at five million views? Or would you say so based on the number of shares? It’s difficult to place a benchmark for success when it comes to viral advertising.

A lot of people mistakenly believe that a skyrocketing viral campaign guarantees equivalent profits. This is not true. Viral campaigns generate a surprisingly low return on your investment in terms of actual sales benefit.
While viral ad campaigns can facilitate brand awareness, this doesn’t necessarily convert the number of clicks to product sales. What does, in fact, boost a company’s sales is connecting with your customers. Focus on creating relatable content that has the power to resonate with your customers and earn their loyalty, which can definitely bolster sales and lasts over a longer period.

So, are investments in “viral” campaigns really worth it despite not being a sure-fire method? Tell us what you think. To know more visit.

Why Events Should be Part of your Marketing Strategy

5 Business Management Technologies You Should Train Your Employees to Use